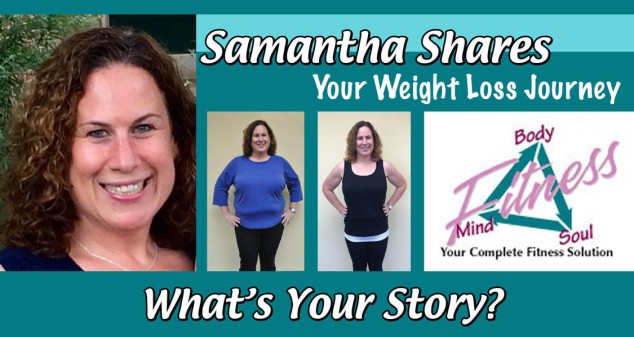 In June of 2014, Peg threw out all her small clothes. She was tired of them hanging in her closet never to be worn. Enough was enough.

A month later, she happened to be flipping through the Penny Power. She saw an ad for fitness for overweight and out-of-shape women. Something about that ad spoke to her. She called the next day.

Peg started with Boot Camp at Mind Body & Soul Fitness. She had no idea it was Boot Camp, though! She thought it was just a really cool workout class. When someone told her the name of it, she almost fell over! She was in no shape to be doing Boot Camp! But it was too late. She already was.

After she started seeing results from the exercising, she decided to incorporate the food plan as well. In 9 months, she lost 74 pounds. She is now maintaining and in training to become a weight loss food coach herself.

Peg has fibromyalgia. She has a bad knee. She had a list of reasons as to why she could never be in shape and fit. None of them mattered once she started to believe in herself.

Her weight loss coach reminded her constantly of how far she had come. She checked and double checked Peg’s food logs to make sure they were accurate. She offered alternatives when Peg plateaued. All of that support and accountability helped Peg get there where she wanted to be.

Peg was an 18/20. Now she is a size 6. She had to buy all new clothes to replace the ones she gave away and the ones she outgrew.

Her husband has jokingly said that he feels like he is cheating on his wife with the new Peg.

At their mountain house, Peg can now climb the hill to get in the door. She does not even think about it. There was a time, though, that she would have to stop and make a conscious effort to get up that hill.

Peg is still in Boot Camp. With that belief in herself, she is in the best shape of her life.

Mind Body & Soul Fitness has changed Peg’s life. She was a woman who could barely do one sit-up. When she said that to someone, they helped her do 50! And then they took a break. And then she did 50 more. She felt empowered. She felt strong. She felt in control!

If you want to lose weight the healthy way, cook your own foods, have the support of a private coach in your corner every step of the way, then you are in the right place. If you want to avoid crowded meetings and pre-packaged foods, look no further. If you want to be like Peg, then contact Mind Body & Soul Fitness today. Yes you can!